Welcome to the Kleanthous Research Group 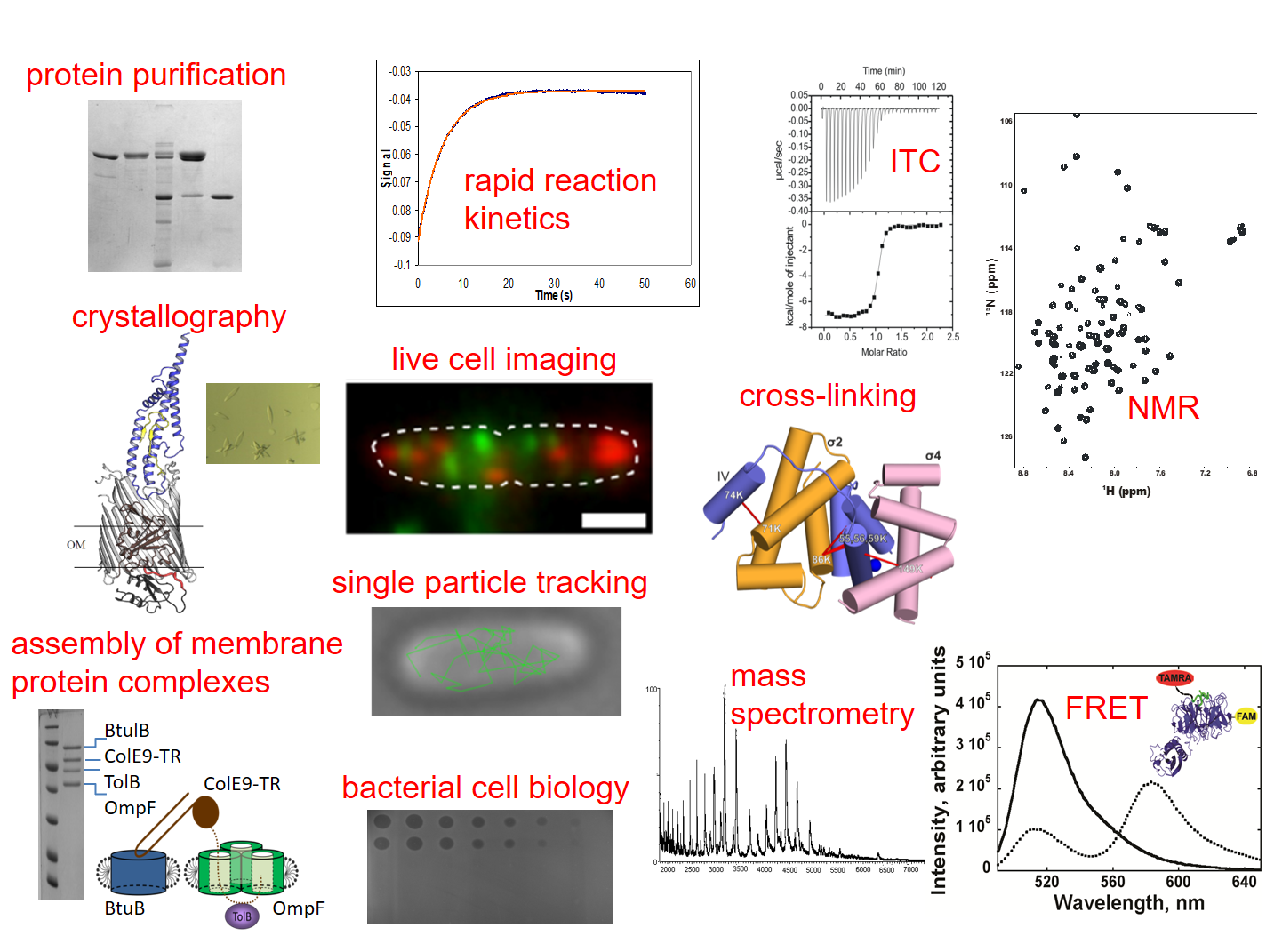 In my laboratory, we aim to understand how protein-protein interactions in bacteria help support the organisation, structure and stability of the outer membrane and how such interactions can also be exploited by protein antibiotics known as bacteriocins to kill bacterial cells.  Our research typically incorporates a range of biochemical, biophysical, structural and cell-based techniques, as summarised in the figure above.  Our work is supported by the Wellcome Trust, ERC, BBSRC and MRC.

Bacteriocin translocation – Bacteriocins are species-specific protein antibiotics that parasitize a variety of outer membrane and periplasmic proteins in Gram-negative bacteria.  Our work centres on the entry mechanisms of colicins, which target Escherichia coli, pyocins, which target Pseudomonas aeruginosa, klebicins, which target Klebsiella pneumoniae, and marcescins, which target Serratia marcescens.  These toxins serve as important agents of competition within microbial communities.  We study both nuclease (DNases, rRNases and tRNases) and pore-forming bacteriocins, which use their network of protein-protein interactions within the cell envelope to establish a translocon complex that delivers a toxic domain into the cell.  Hence, bacteriocin translocation represents a highly simplified model for understanding cellular protein import. 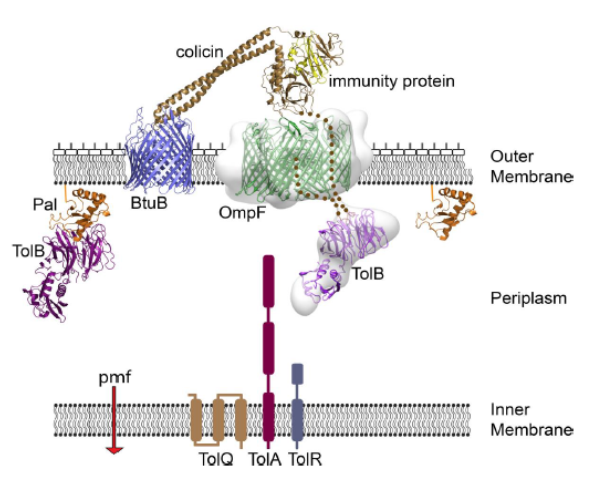 Colicin E9 delivers a linear peptide signal through the pores of the Escherichia coli porin OmpF in the outer membrane to capture the energized TolQRAB complex in the inner membrane and periplasm. The colicin has two OmpF-binding sites within its 83-residue intrinsically unstructured translocation domain (dotted line).  These allow the colicin to capture TolB on the other side of the membrane by threading this unstructured domain through two pores of an OmpF trimer, one going into the cell the other coming back out again.  OmpF is normally used by the bacterium to exchange metabolites with the environment and bring in nutrients such as glucose into the cell. This intricate cascade of protein-protein interactions initiates entry of the colicin’s nuclease killing domain into the cell. See Housden et al (2013) Science 340, 1570 for further details. 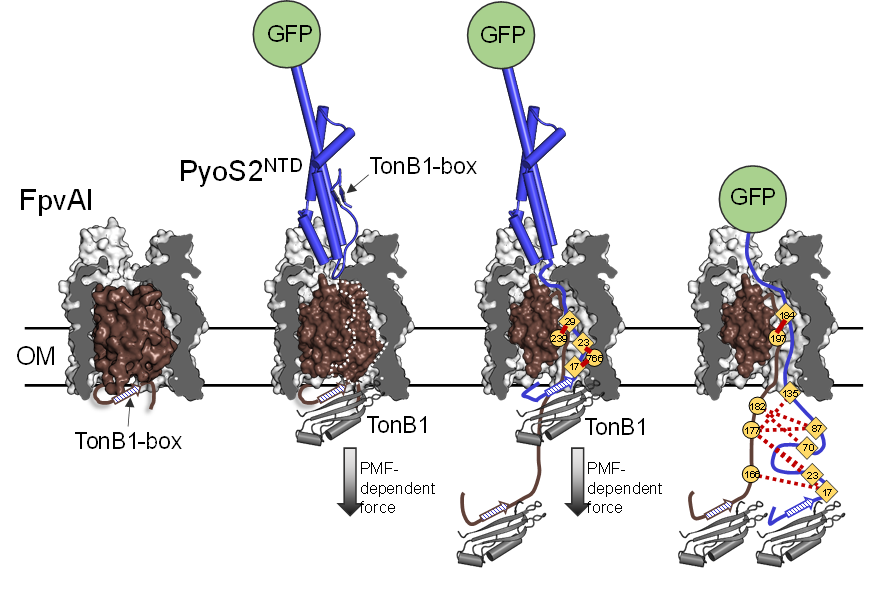 Pyocin S2 tricks the iron uptake receptor FpvAI into importing it across the Pseudomonas aeruginosa outer membrane.  The N-terminal domain (NTD) of pyocin S2 (a nuclease bacteriocin) binds to the FpvAI receptor inducing a force-dependent conformational change, which opens the receptor. Pyocin S2 then delivers a signal (the TonB1 box) that binds TonB1 in the periplasm, inducing a further force-dependent step that unfolds the toxin and brings it into the cell. Green fluorescent protein (GFP) was used here to block entry. This approach allowed us to trap this partially translocated state and map its protein-protein interactions by photoactivated crosslinking (red and dotted lines). See White et al (2017) PNAS 114, 12051 for further details.

Developing bacteriocins as protein antibiotics – The rise of multidrug resistant bacteria coupled with the lack of new classes of antibiotics in over 30 years means there is a pressing and urgent need for new antibiotics especially for molecules that target pathogenic Gram-negative bacteria. In collaboration with groups in Oxford, Glasgow, Cambridge and UCL, we are exploiting the species selectivity and potency of bacteriocins as antimicrobials for Pseudomonas aeruginosa and Klebsiella pneumoniae, which are major causes of opportunistic and hospital-acquired infections world-wide. 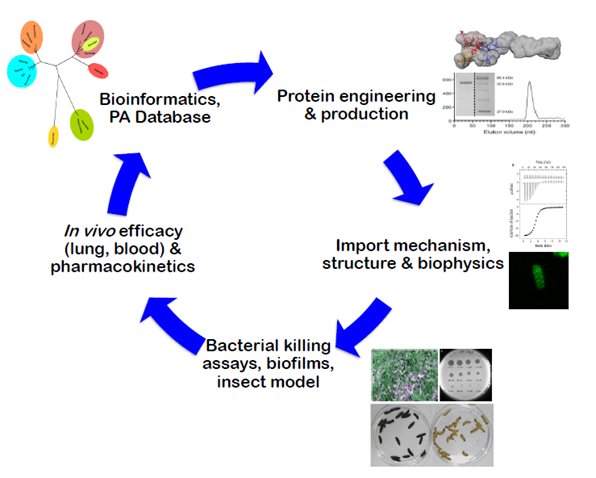 Outer membrane proteins (OMPs) co-localize in supramolecular assemblies in the outer membrane of E. coli. Left-hand panel, engineering colicins E9 and Ia as specific, high affinity labels of the OMPs BtuB and Cir.  BtuB is the transporter for vitamin B12 while Cir is a siderophore transporter.  The two colicins were inactivated by internal disulphide bonds prior to labelling with fluorophores.  Right-hand panel, E. coli OMP islands imaged by TIRF microscopy and showing the co-localization of BtuB (labelled with ColE9-AF488, green) and Cir (labelled with ColIa-TMR, red).  Scale bar is 1 mm.  See Rassam et al (2015) Nature 523, 333 for details. 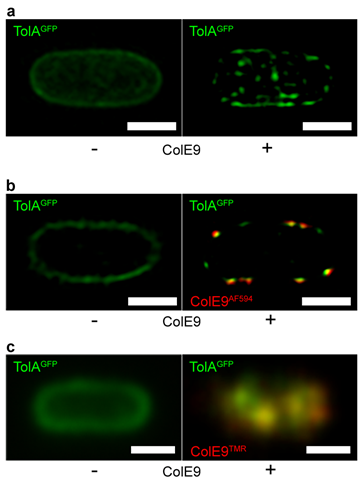 The Tol-Pal assembly – Tol-Pal is a little understood complex that is required for the stable maintenance of the Gram-negative outer membrane and which is recruited to the cell division apparatus late during division.  We are trying to uncover the native function of the Tol-Pal assembly, how and why it is coupled to the proton-motive force across the inner membrane and the mechanism by which bacteriocins subvert the assembly to initiate import across the outer membrane. 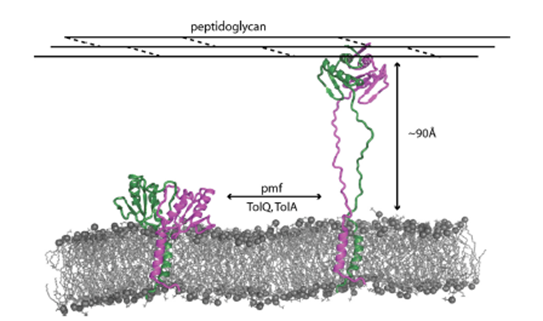 Postulated structural transition for the proton motive force (PFM) linked TolR protein. TolR is a dimeric protein that is part of the TolQRA complex in the inner membrane of Gram-negative bacteria. This work reported the crystal structure of a strand-swapped dimer of TolR (left hand figure). We postulated that strand unwinding would allow TolR to contact the peptidoglycan cell wall 90 Å away (right hand figure), which is a requirement for function of the Tol-Pal assembly. These transitions are thought to link to Tol-Pal stabilisation of the outer membrane of Gram-negative bacteria. See Wojdyla et al (2015) J. Biol. Chem. 290, 26675 for further details.

* Have established their own labs

All graduate student enquires should be directed to Prof. Colin Kleanthous.

The 5th International Conference on Molecular Perspectives on Protein-Protein Interactions

The 40th Lorne Conference on Protein Structure and Function

The 28th Annual Symposium of the Protein society

How bugs kill bugs: progress and challenges in bacteriocin research