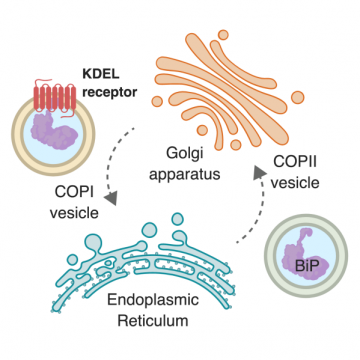 Figure 1. Resident proteins that escape the ER are captured by the KDEL receptor and retrieved in a COPI dependent process (Click image to enlarge)

The Newstead and Barr labs have solved a major puzzle in protein trafficking that has remained elusive for over two decades.  This work, which is published in Science, has uncovered the mechanistic basis for how KDEL receptors capture their cargo and transport them back to their correct location.

A long-standing puzzle in the field of cell biology has been the molecular basis for retrograde trafficking of chaperone proteins from the Golgi apparatus back to the ER.  Eukaryotic cells concentrate protein chaperones, such as BiP, in the lumen of the ER, which are essential for correct folding of membrane bound and secreted proteins such as antibodies. However, during normal cellular function these chaperones are swept along the secretory pathway to the Golgi, from where they must be returned (Figure 1). For over twentyfive years cell biologists have known that the KDEL receptor is responsible for this process, but the molecular basis for its function has remained elusive.

Now, a new study from the Newstead and Barr groups within the Department of Biochemistry reports the first crystal structures of the KDEL receptor that show how this receptor recognises KDEL signal peptides on chaperones and facilitates the return of these proteins back to the ER.

The KDEL receptor was captured in the apo ER-state, KDEL signal peptide bound Golgi-state and in complex with a synthetic single chain antibody (SyBody). Using a combination of the structural analysis, biochemical and in vivo cell based assays, the team identified a conformational switch that upon luminal KDEL peptide binding, exposes an ER retrieval motif on the cytoplasmic side of the receptor.

The ability to recapitulate the in vivo binding and release cycle of the receptor using purified components, provided the necessary evidence to show the receptor is the minimal component required to bind KDEL ligands in the Golgi, which was unclear from previous work in the field. The high resolution of the crystal structures obtained using lipid cubic phase crystallisation revealed that KDEL binding results in the formation of a very short hydrogen bond, an extremely rare intra molecular interaction. This bond only forms when the pH of the binding site is acidic and helps to explain how pH changes between the ER and Golgi help to drive protein trafficking in one direction.

Binding of the KDEL signal peptide in the lumen of the Golgi results in structural changes in the cytoplasmic face of the receptor, which signals to COPI coatomer to bind and initiate trafficking back to the ER

Overall this study sets out a mechanistic framework for understanding how intracellular receptors recognise cargo proteins and signal across organellular membranes to initiate trafficking events.