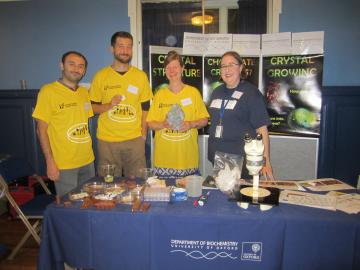 The IF Evening team

For the first time this year the annual Oxford Science Festival was held in October rather than June, and the Biochemistry Department fronted two stalls in the Town Hall on the weekend 13th and 14th October and one in the Weston Library on the afternoon of Friday 12th October.

The two stalls showcased different aspects of the Department's work. The C.elegans stall on "How can worms help us cure neurodegenerative disease?" was fronted by the Woollard group with Chronos Therapeutics and included Alison Woollard, Huajiang Xiong, Emily Baker, Pete Appleford, Karolina Chocian, Nico Dalliere and Tom Barratt. The collaborative research involves using the simple microscopic nematode worm, C. elegans to model the neurodegenerative diseases of Alzheimer's, Parkinson's and Amyotrophic Lateral Sclerosis (ALS), and screen for drugs that alleviate symptoms and improve quality of life. Through a portable light and fluorescence microscope, the public could watch a variety of live worm strains- both "normal" ones, and ones expressing human proteins that are associated with neurodegenerative disease. As these human proteins are tagged with Green Fluorescent Protein, the worms glowed green under UV light: the proteins form aggregates in worm neurons just like they do in human neurons. 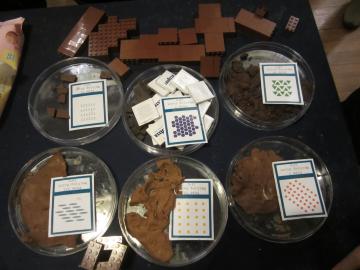 Crystallography and how it is used in structural biology was the topic of the second stall, with the 6 crystal forms of chocolate being the main draw for interested members of the public. The various ordered arrangements of cocoa butter have 6 different melting temperatures, ranging from 17 to 36°C. The chocolate we buy is in Form V: it makes a nice snapping sound when we break it and can be bitten without cracking our teeth. On show we had chocolate that had been allowed to cool at room temperature, at -18°C (deep freeze) and 4°C (fridge), as well as samples of 'good' chocolate. The various dishes of chocolate felt very different when touched. Jelly babies also featured on the stall; children used them with cocktail sticks to make ordered arrangements as in crystals, and then took their creations home in plastic bags. This was highly successful and resulted in us using 17 kg of jelly babies and 3,500 cocktail sticks over the Festival! We were surprised to be busy all the time…

Lysozyme crystals were also on display to be viewed in a microscope, and visitors could set up their own crystallisation drop and watch crystals growing in around 1 minute. For the 'adults only' evening session on Saturday, we had a laptop running the molecular graphics package 'COOT' and could demonstrate the electron density of amino acids in a protein, and the way we build models into it.

Altogether it was a very enjoyable and exhausting 3 days, and we thank all the volunteers, who were drawn from a wide range of different research groups in the Department. They were: