New research published in Cell Reports from Martin Cohn's lab has revealed a new layer of control of the Fanconi anaemia pathway that repairs a harmful form of DNA damage. 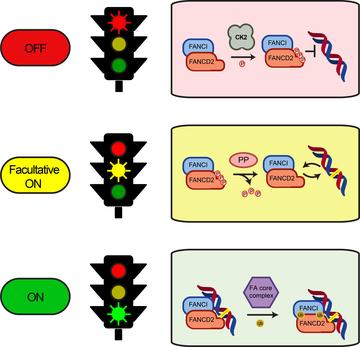 The mechanism described could help to provide a safeguard against spuriously activating the pathway and could open up therapeutic possibilities.

The Fanconi anaemia (FA) pathway repairs interstrand crosslinks (ICLs) in DNA. An essential step of the pathway is recruitment of a protein complex called FANCD2/FANCI to the ICL. Transfer of ubiquitin onto FANCD2 and FANCI by monoubiquitination also needs to take place for repair to proceed. Strict regulatory steps must control recruitment of the FANCD2/FANCI complex to DNA, and activating phosphorylation of the complex is believed to be involved, but the precise mechanisms are not known.

Now Martin Cohn and his colleagues, including former DPhil student David Lopez-Martinez and current DPhil students Marian Kupculak and Di Yang, have discovered a new mechanism involved in this control. By carrying out an unbiased search of phosphorylation sites across FANCD2 using mass spectrometry, they found a previously unknown cluster of six residues that are phosphorylated. Phosphorylation at this site inhibits both FANCD2 recruitment to ICLs and its monoubiquitination.

The group used purified proteins to reconstitute an in vitro system containing several steps of the pathway and showed that the FANCD2/FANCI complex is kept in an inactive state through constitutive phosphorylation of the cluster.

Alongside in vitro work, the researchers carried out live-cell imaging at the Micron facility, which confirmed that phosphorylation in human cells also inhibits both FANCD2 recruitment to ICLs and its monoubiquitination.

Overall, the group's findings suggest that phosphorylation at the newly discovered cluster on FANCD2 suppresses the repair pathway and that a phosphatase, still to be identified, is likely to be recruited following DNA damage to allow the pathway to become activated. 'Whilst we have found the brake to the pathway, we don't yet know the key to open it up,' says Martin.

'We are getting some way to identifying the phosphatase responsible and will then be able to test it in vitro and in vivo.' - Di Yang

The new mechanism described could potentially be exploited in the treatment of cancer, Martin adds. 'If we can identify the enzymes involved, this might suggest new therapeutic targets to inhibit the DNA damage response more efficiently.'

The Cohn laboratory is funded by the Wellcome Trust and the Medical Research Council.