Students in the Cohn group have discovered a large DNA repair protein complex functioning in the Fanconi Anemia pathway, reported in their new paper in Cell Reports. The study addresses key questions on the pathway and opens up new directions for further discoveries.

Patients suffering from the genetic disease Fanconi Anemia, suffer from inborn skeletal abnormalities, high incidence of cancer, and the development of bone marrow failure. The clinical manifestations are due to a dysfunctional Fanconi Anemia pathway in all cells in these patients, caused by mutations in Fanconi Anemia genes.

There is currently no effective treatment for cancer in these patients. Bone marrow failure is treated well by bone marrow transplantation, however patients are immunocompromised post-transplantation, which is of particular concern during the current Coronavirus pandemic. For these reasons, there is a real need to better understand the underlying mechanisms of Fanconi Anemia. Enhanced knowledge can pave the way for new therapeutic approaches. 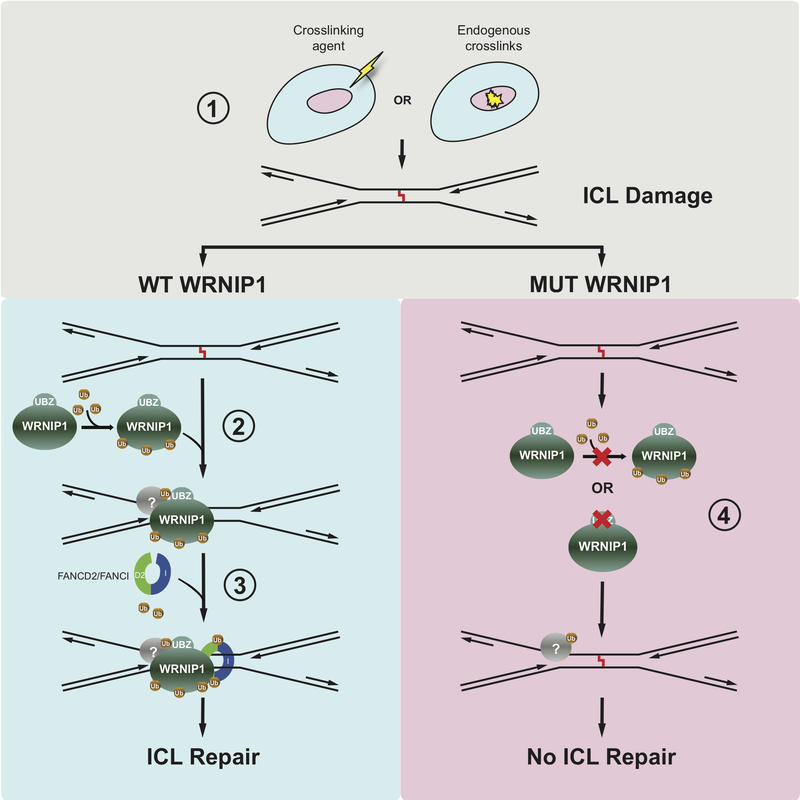 (1) DNA interstrand crosslink (ICL) occurs in a chromosome. (2) WRNIP1 is recruited to the DNA damage, potentially assisted by a hypothetical protein that is ubiquitinated. (3) The FANCD2/FANCI complex is recruited and monoubiquitinated, causing a conformational change that leads to its ring-like structure encircling the DNA helix. DNA repair can proceed. (4) A dysfunctional WRNIP1 protein prevents proper activation of the pathway, in turn reducing the DNA repair.

Decades of research in many laboratories around the world have taught us a lot about how the Fanconi Anemia pathway works. We now understand that the pathway is essential for the repair a special type of DNA damage in our chromosomes, which is called DNA interstrand crosslinks. This type of DNA damage occurs regularly, and is repaired continuously, in the chromosomes of healthy people. However, in Fanconi Anemia patients the damage cannot be repaired, and therefore accumulates over time, causing the clinical problems mentioned.

The new study from the Cohn group by current DPhil students Di Yang, Kelvin Yaprianto and Marian Kupculak as well as former students Anna Socha, Alicja Bulsiewicz, Eric Liang and Andreas Hadjicharalambous, together with collaborators from Harvard Medical School, uncovered the identities of a number of such proteins that were not previously known to be important for the Fanconi Anemia pathway. They were found in complex with already known Fanconi Anemia protein FANCD2, a heterodimerization partner of Fanconi Anemia protein FANCI. In the study, one such protein, WRNIP1, was shown to be important for how cells respond to, and repair, DNA damage. Using a combination of state-of-the-art cell biology, biochemistry, live-cell imaging, and genetic engineering it was shown that the WRNIP1 protein itself is locating directly to the DNA damage on human chromosomes. Furthermore, its relocation is important for several previously known Fanconi Anemia proteins to relocate also, thus WRNIP1 is required at an initial and decisive stage of the pathway (Figure 1). At current, it is not known whether mutations in the gene encoding WRNIP1 causes Fanconi Anemia, which is the case for the existing roughly two dozen Fanconi Anemia genes. More research is required to determine this.

The study also uncovered the identities of several other proteins in addition to WRNIP1, which now can be studied by research groups interested in Fanconi Anemia and DNA crosslink repair. We hope that this new insight will prove to be a valuable addition to what scientists and clinicians, already know about the Fanconi Anemia disease and the underlying pathway.

The Cohn laboratory is funded by the Wellcome Trust.