Stopping the malaria parasite in its tracks

How can we stop the malaria parasite from getting into our blood cells? Two recent papers from a close collaboration between the Higgins group and Professor Simon Draper at the Jenner Institute in Oxford, have addressed this question.

Malaria is caused by a family of single-celled parasites, known as the Plasmodium species. The most-deadly of these, to humans, is Plasmodium falciparum, while Plasmodium vivax also causes a huge disease burden. Hundreds of thousands of people each year die from malaria while hundreds of millions suffer a serious case of the disease. 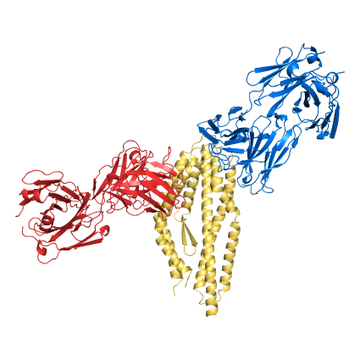 The first study, published this week in Cell [1], assesses the effect of vaccinating volunteers with a molecule from Plasmodium falciparum. The RH5 molecule has been found to be essential for the parasite to get inside human red blood cells through its interaction with basigin, and previous work from the Higgins and Draper groups worked out how RH5 binds to basigin [2]. Now we take these studies another large step forward, through a project carried out by a graduate student, Dan Alanine. Volunteers in Oxford were vaccinated with RH5 as part of a Phase I clinical trial and the antibodies that they generated were tested for the ability to stop the malaria parasite from getting inside red blood cells. Structural studies then showed how these antibodies work, revealing where the most protective antibodies bind. This study also made an exciting discovery. Normally vaccination strategies are designed to only produce antibodies with the desired properties. However, in this case an antibody was discovered which did not stop the parasite from getting into red blood cells, but did make all of the protective antibodies more effective. Future vaccines will aim to generate these helpful antibodies. 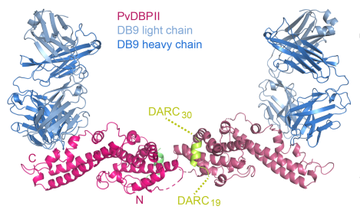 A second study, published in Nature Microbiology [3] used a similar approach to study Plasmodium vivax. Here we assessed the effectiveness of antibodies that target the critical invasion protein PvDBP. Once again antibodies were isolated from vaccinated human volunteers and were tested for the ability to stop the parasite from getting into human blood cells. To carry out this analysis, Tom Rawlinson from the Draper group travelled to Thailand, armed with antibodies, to assess their ability to prevent a broad range of vivax parasites from invading cells. A clear winner was selected from this panel, with a broadly protective effect and Natalie Barber from the Higgins group used structural biology to understand where it binds on PvDBP.

These two studies show how the human immune response can generate protective antibodies against the blood stage of the most dangerous malaria parasites and give clues to help us to design the vaccines of the future.