Tony Watts and Peter Judge at the Emirates Foundation

Tony Watts and Peter Judge at the Emirates Foundation

Tony Watts and Peter Judge have just returned from a most exhausting, but rewarding 3 days at the Emirates Foundation, "Think Science Fair" in Dubai.

This is the first time Oxford University has been to the Gulf States on any admissions or public engagement of science exercise in recent times.

Over 15,000 school students from around the Gulf (Iraq, Kuwait, Saudi, UAE, even India) were registered, and the public were admitted on one day.

From 10am - 2pm every day, Tony and Peter were busy, demonstrating model building (DNA) and chromatography (pigments from spinach), as well as diffraction (lasers, Young's slits) and crystallography.

Also, Caitriona Woolhouse from the University admissions team gave a 1 hour video presentation from Oxford, and there was a very lively Q&A with Peter, Caitriona and Tony answering questions.

The Fair was also all included as part of the UK/UAE 2017 Affiliated Programme (Patron Prince of Wales), and Tony and Peter were invited to a lavish reception at the British Embassy in Dubai to celebrate the Queen's Birthday. 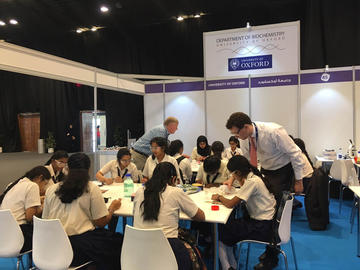 Tony and Peter in Dubai