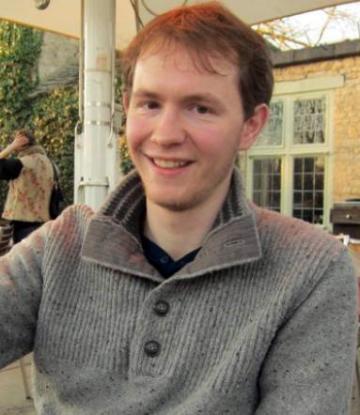 Charles Underwood, who has completed his final year, talks about how he has found the course and Oxford

'I studied biology, chemistry, maths and economics at A' level, and the two subjects I liked the most were biology and chemistry. Deciding to apply here came from a parents' evening. One of the teachers at college asked if I'd thought about applying to Oxford or Cambridge. I hadn't really thought of it. On the back of that, I came on a trip organised by my college in Preston. I stayed here at Jesus College and came to one of the open days here in the department. Then I came down again to St Anne's with my dad, for a college open-day, and we talked with a biochemistry tutor. I ended up deciding to apply for St Anne's.

I had to write a personal statement which was mainly academic-based. Then I got invited down at the beginning of December and had two interviews, one with Dr Harris from the department and one with a chemistry tutor. I think I was well prepared for the interview but I couldn't really tell how it had gone.

I heard from Oxford before Christmas. It was an offer of three As. I wanted to come here because I thought it was the best place.

I went to a tertiary college, with about two and a half thousand students, all 16 to 19 year olds. The college was very encouraging in the application process. They had a fairly organised programme for students applying to Oxford or Cambridge and organised the trip down here. They put on a lecture to explain how the application worked and how to write your personal statement. I had a mock interview with an academic from a local University, and it was useful to have a bit of practice and to have someone asking a few testing questions.

Thinking about it, the first term of the first year is quite a shock. Getting to grips with it then is quite important, realising how much work you do have to put in and just being organised. After that I found the workload manageable. But I think it's important that you're interested in the subject – it's obviously a lot easier putting work in. And you'll enjoy it a lot more if you're interested. I think that people who are offered the chance to come here, because it is so rigorously assessed at interview, should be reassured enough that they can cope with it.

It was a big step up from college I think, but that might have been because I wasn't challenged before. So people shouldn't be worried about this because when they're doing their A' Levels they might not be being challenged fully. You have that capacity to go a bit further.

In the second and third year of the course, you have tutorials with college tutors and other specialists in the specific topics. In each topic, you have to read primary literature and then be able to discuss it. Because there aren't exams at the end of the second year, you can focus on understanding the topics and enjoy it. You might find a topic that you really enjoy that you want to carry on in your fourth year and study in your Part II project.

At the end of the second and third year, I did Summer lab projects. The second Summer I did a project in Munich as part of a Summer programme sponsored by Amgen (a biotechnology company). That was for about 9 weeks in the Summer and was my first real experience in a research lab. It was a really fun experience. There were about 20 students also taking part in the programme and they were from different countries, all over Europe. I still keep in touch with a lot of them.

Towards the end of the third year, different Professors in the department advertise 18-week lab projects for the fourth year. There are about 100 projects advertised and you go and meet the different professors who advertise projects you are interested in. There are supervisors in this department but also all around the University – for instance, in Anatomy and on the John Radcliffe Hospital site. If there is someone who doesn't advertise a project but you really want to work with them, you can go and do so. You can even organise something abroad. I ended up with my first choice – with Neil Brockdorff - and I really enjoyed it.

You start the project in September and continue until the beginning of March. It's quite a long stretch which is good. It's long enough so that you can have a proper project and do some experiments.

I probably enjoyed the fourth year the most. You make use of everything you've learnt which is satisfying. A good thing about the way the fourth year is laid out is that you can afford to take off a day or two here and there, for an interview. When you are putting applications for PhDs together, you can ask people around to read your covering letters which I found really useful.

I applied for quite a few PhD posts, some in the UK, some abroad. I had an interview to stay here, and one in Cambridge as well, and an interview in Cold Spring Harbor in New York, and ended up getting offers for all three of these. I've decided to go to Cold Spring Harbor. I'm interested in non-coding RNAs and genomics, and there are quite a lot of groups there working in that area.

I've really enjoyed Oxford. It's a lovely place to live and I think the social aspect of it is nice as well – because of the collegiate nature of the University you end up making friends with people who do different subjects. In fact, the people you are most friendly with are those doing different subjects because those are the ones you live with in the first year. I know quite a lot of people in the biochemistry cohort but they aren't the closest group of friends.

I've played quite a lot of football for the college over the years. Also, there are many notable speakers who come to Oxford. I went to listen to Gordon Brown whilst he was Prime Minister, and David Cameron before he became Prime Minister.

When I was applying to Oxford, I was advised to read a popular science book to demonstrate my interest and also provide a topic to write about in my personal statement or to talk about it in the interview. I guess the more things you can put in your statement that lead on to questions the better. I spent a week in a lab at Lancaster University – the lab work was really quite basic, but I could write about it in the statement and I was asked about it in my interview. Make sure you've got something which shows your interest and be prepared to get across what you got out of it.'