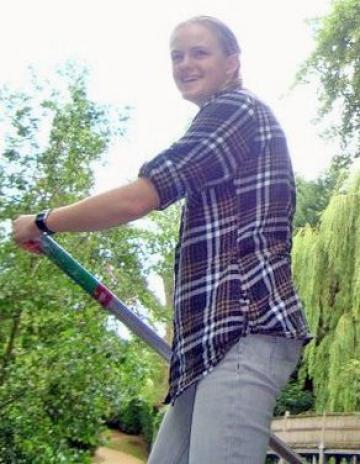 Katherine Rollins - At the end of her second year:

'At school, biology and chemistry were my two best subjects and the two I enjoyed the most, particularly areas where the two overlapped. I spent quite a long time looking at Natural Sciences courses, but then decided that I wanted to study Biochemistry in more depth. What I enjoyed the most was the genetics and carbohydrate and protein chemistry that I did in my A' Level Biology, and I wanted to carry on with that.

I preferred Oxford over Cambridge. They run sciences very differently in Cambridge. I decided that I'd done enough Maths and Physics – though you do a bit of that in your first year in Oxford – and that now I wanted to study a topic in more depth. That's what Oxford offered over Cambridge.

My school was really supportive and encouraged people to apply. We came as a school to look round Oxford on one of the open days. We were based at St Anne's but I managed to get to the department in the afternoon and have a look round.

I applied to Trinity College and was interviewed there. I had two interviews with the tutors who are now my tutors. I was allocated Wadham for a second interview. It was quite daunting to start with – you hear all these rumours about what an Oxford interview is like - but all the tutors were really friendly and they were there to help you. The interviews are essentially testing whether you'd be a good person to tutor rather than trying to find out how much you know.

Everyone starts off the course with basically the same knowledge, so it works out quite well when you arrive. Everyone on the course has A' level chemistry, and nearly everyone has A' Level Biology. About half the year have A' Level Maths, but if you don't have this, you get extra maths classes in the first year to bring you up to the standard.

The first year is very structured. You get classes in addition to lectures and tutors. You get problem sheets every week that are marked, and you go through these in a small group. You cover a wide range of topics, but not in any detail. You only have to pass the first year exams, so there isn't too much pressure on you. If you work during the year then you're fine.

All the tutors and lecturers know exactly what they are talking about because they are talking about their own work. On the whole, they are really good at lecturing. There are six biochemists at Trinity in my year, that's a big year. We have tutorials in two groups of three so there's nowhere to hide in a tutorial! The tutors in general are really helpful. We have meetings every term to check you are coping, and if you've got problems or struggling with work, there are always people to talk to.

In my second year, I used what I had learnt in the first year. You need the basic understanding to do the detailed work in the second year. The second year is much more essay-based and you go into a lot more detail about specific subjects. You still have tutorials, you don't have classes, and there are fewer lectures. The practicals are less frequent but much longer.

I found the genetics really interesting. It's a field that's developing very fast at the moment. It's interesting to hear in a lecture: 'these are the current models... but the general answer is that we just don't know...' It makes you realise that you're at the cutting edge of science and you're not just regurgitating facts. You're working out the borderline between accepted facts, details that are still being disputed, and things that no-one has any ideas about. It's really interesting to be working at that level already when you're only in your second year.

The tutors encourage you to get some research experience before your fourth year – it's not essential but it definitely helps. The tutors are really good at helping you arrange these projects. Last Summer I did an 8-week project here in the Biochemistry department. I learnt so much from that project, it was definitely worth doing.

People aren't like the Oxford stereotype in any way, shape or form you'll find when you get here. Everyone's very friendly. At college, I know everyone in my year and the majority of people in the year above and below, just because you do everything together in college. You'll have meals together, and you spend your social time in college. I know the biochemists less well than people in college. I think that's quite good because you get to meet people doing different things. You've got all the college sports teams and societies and then there is a lot going on at University level as well.

I've spent a lot of time swimming. I've been on the Blues swimming team and just finished being captain of that. I'm carrying on next year. I've been swimming around 7 times a week, plus all the captain's responsibilities. You can fit it in, you just have to be organised with your time.

I'd definitely encourage people to apply – it's been very rewarding for me. Although it's quite intense being here, you get so much out of it. Don't be put off by what you hear about Oxford because it's nothing like that. There's a big social scene. The interviews are not as scary as they're made out to be, and if you show enthusiasm and show that you want to be there, that counts for a lot.'