The main research interests of the Watts's group focus on the study of the structure of small molecules when at their site of action in membrane-bound proteins whilst in their native, fully functional form in membranes. In addition,
peptides which form channels in membranes are being studied to high resolution using solid state NMR methods. The potential for understanding how the membrane-bound targets for hormones, solutes and drugs function can be realised
with this emerging technology.

The NMR Facility was opened in 1998, funded through investments by HEFCE and UK Research Councils with matching funds from instrument manufacturers. It is equipped as one of the major
solid state biological NMR centres in the world and now has some of the most advanced instruments (at 200MHz, 400MHz, 500MHz and 800MHz) and support facilities anywhere world-wide for use in structural biology.

The Watts lab traveled to Portugal for the Bionanotechnology meeting in Sesimbra from 10-13 July and the EBSA Congress in Lisbon 13-17 July, 2013. Here are some pictures of the events. 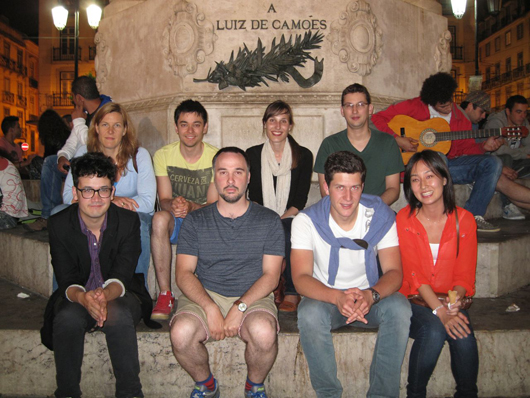 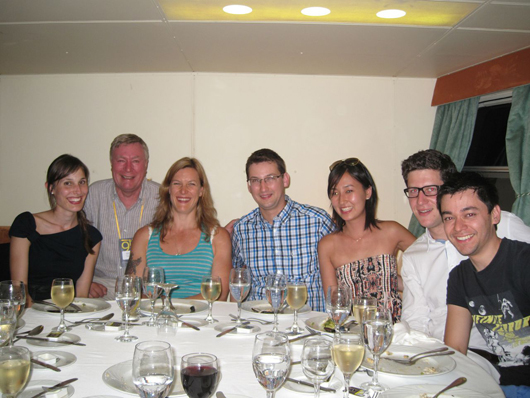 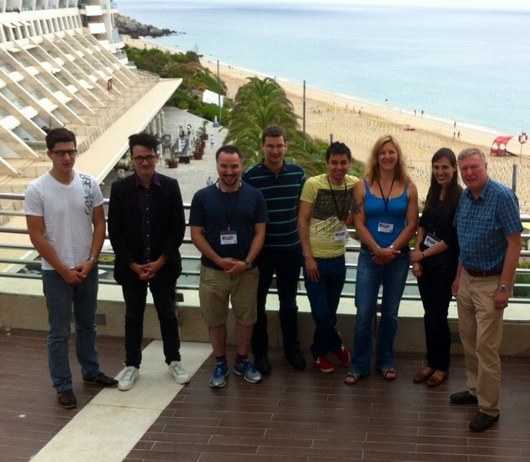 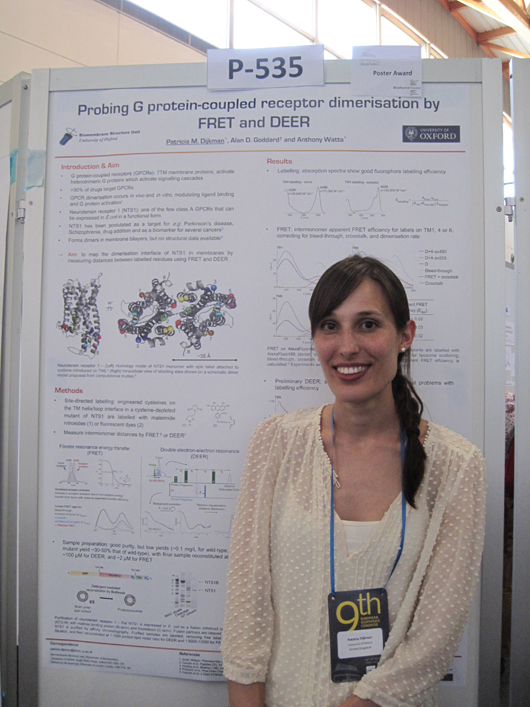 Over the last 20 years, a large battery of methods and techniques has been applied to the study of biomembranes, accumulated through unbroken, significant funding from a range of national and international sources. In particular, a new approach to membrane studies has been developed, namely the exploitation of solid state NMR to resolve both dynamics and structural details of membrane proteins and lipids. 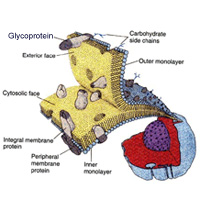 The group conducts research in 3 principal fields, although there is often overlap between disciplines:

Through the use of wide-line, solid state NMR, the perturbation of bilayer surfaces induced by integral and peripheral proteins has been studied. In this context, the "molten globule" state of a membrane associated protein, cytochrome c, has been identified. These studies are being complemented with stopped-flow fluorescence and CD studies of the insertion, folding and translocation of apocytochrome c and cytochrome c, into anionic lipid bilayers. For this work, cardiolipin, synthesized using a new route resolved by us, is being employed.

This structural work on integral membrane proteins requires instrumental development (coils, probes, computational analysis) as well as bio-organic chemistry (synthesis of isotopically enriched molecules), membrane biochemistry (isolation, purification and functional description of proteins) and molecular biology (expression of proteins). The potential for the method is significant and, in the absence of other approaches, may be the only method by which the pertinent details of membrane proteins, and their regions involved in defining molecular specificity, may be described in detail for some time to come.

Using both static and magic angle solid state NMR methods, we have been resolving structural details of large, fully functional integral membrane proteins in natural and reconstituted membranes. These methods permit atomic details to be obtained of well-defined regions of integral membrane proteins, namely those regions associated with ligand or prosthetic group binding, which may be intractable by crystallographic or other spectroscopic methods. Indeed, in the absence of routine crystallography, it is likely that structure-function relationships of membrane proteins can be described at the molecular level only through the use of such alternative methods. Proteins currently under study are bacteriorhodopsin, the gastric H+/K+-ATPase, the kidney Na+/K+-ATPase, the over-expressed GalP sugar transporter,nicotinic acetylcholine receptor, phospholamban and vertebrate and invertebrate rhodopsin.

In bacteriorhodopsin, we have been able to define the conformation and orientation of retinal whilst within the protein binding site and in the membrane using NMR observation of deuterated retinal using an ab initio approach. Curvature of the retinal polyene chain has been defined for the first time, as well as the known orientation of the ß-ionone ring of the retinal with respect to the protein. Much, but not all, experimental information available for this protein is confirmed by this non-perturbing NMR approach. Also the lack of any large change in retinal orientation within the protein during the photocycle observed using this non-perturbing approach, is already helping to redefine descriptions of the proton gradient generation by the protein on photon incidence.

Membrane protein function is controlled and regulated by, amongst other factors, the local lipid environment. Lipid-protein interactions have been studied and classes of lipids described which either have non-specific, solubilizing function, a specific functional role or combination of the two rôles. Spin-label ESR and deuterium NMR methods have both been used to prove, since it was very contentious at one time, that both spectroscopic methods can give consistent views of lipid-protein interaction and the molecular specificity of such interaction. Some fifteen proteins have been studied by various groups and we have been involved with about one third of this number. The wealth of information obtained has required much bio-organic chemistry (spin-label and deuterated lipid synthesis) and membrane protein functional reconstitution technology.

More recently, lipid-protein interactions have been found to be important in producing and stabilizing 2D-arrays of integral proteins in membranes. One particular lipid, phosphatidylglycerol phosphate is essential (and the sulphate derivative less so) in the formation of 2D arrays of bacteriorhodopsin. This has been shown by electron microscopic methods and by controlled reconstitution methods and the enigma of why and how this protein forms arrays is now resolved. Other proteins are now being examined with a view to producing routine 2D arrays for structural work.

Multidisciplinary approaches to the study of membrane structure and function are therefore used in all aspects of the current work. Most biophysical methods have been used including NMR, ESR, ultracentrifugation, diffraction (X-ray, optical and neutron), differential scanning calorimetry, electron microscopy, CD and computational approaches. The general approach is thus to address a system and a problem with a range of appropriate methods, rather than specialize in one method. All this work has been, and is being funded through significant BBSRC/HSFP, EC and MRC programme grants as well as project grant support from BBSRC, EPSRC and MRC.

Since ~50-85% of all drug targets for the next decade are membrane-bound proteins, this important class of biological macromolecule lends itself to non-native uses as sensors, detectors and control devices.

Photoreceptor proteins can be used as light detectors and nanometer-scale photoswitches.

Small molecule-activated receptors can be employed to detect small molecules such as hormones or drugs and can act as signal amplifiers.

We are investigating the functional mechanism of these membrane proteins, modulation with small molecule modulators and protein­lipid interactions on an atomic level. These studies serve as a basis for the design of novel functional units and membrane proteins with new functions. A series of techniques such as NMR spectroscopy, molecular dynamics simulations, and bilayer recordings, supported by solid phase peptide synthesis and expression is used in our laboratories. The projects are supported by the Bionanotechnology IRC which is based on funding from the BBSRC.

Atomic force microscopy (AFM) is being used to visualize conformational changes in membrane receptors upon activation by their ligands. Force measurements made using AFM provide information about binding energies and the selectivity of the ligand - informing the process of rational drug design.

Our research entered a new phase with the sucessful installation of a Magnex 800MHz wide bore (89mm) magnet at the beginning of January 2004. This machine is the largest worldwide for solid state biological work and complements the existing machines in
the Facility.

All magnets are wide-bore (89mm bore diameter) and have a range of probes to suit the fields. We currently have probes suitable for static (non-spinning) work and for magic-angle spinning studies. Rotor sizes vary from 2.5 - 7mm diameter. The probes
are single-. double-, or triple-channeled, including a 4mm 1H19FX probe from Varian, Inc.

Experiment acquisition is supported by consoles from Chemagnetics, Varian, and Bruker. Our most recent magnet and console installation was in January 2005 when a new 500/89 shielded Magnex magnet was installed together with a Varian Infinity+ console.

Currently there are no advertised vacancies for post-doctoral researchers in the Biomembrane Structure Unit.

There are no current funded vacancies for post-graduate students.

Enquiries are always welcomed from researchers with appropriate qualifications who would like to expand either their NMR experience into the biological field or their biochemistry/chemistry experience into the solid state NMR field to resolve the structure and dynamics of membrane proteins.

Informal enquiries should be addressed to Professor A. Watts by email

Please follow the link for a map of the Harwell area. The arrow indicates the position of the Rutherford Appleton Laboratories: http://www.streetmap.co.uk

Please follow the link for a map of the Oxford area. The arrow indicates the position of the Department of Biochemistry: http://www.streetmap.co.uk/

The Bio-Web
A portal that provides an extensive range of diverse resources for Molecular and Cellular Biologists.

About Oxford
A resource for additional information about Oxford City.